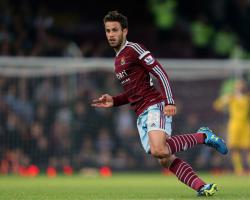 However, he played five times in the Europa League for the Hammers this season.

Ã¢â¬â¹Ã¢â¬â¹Poyet who joined from Charlton Athletic last summer was on loan to Huddersfield Town last season but he made only 2 appearances for them before returning to West Ham at the end of his loan.

Ã¢â¬â¹"It's great to be here

I'm pleased it's been able to go through.

I want to play games and I'm grateful to the club for giving me an opportunity to come and do that I'm raring to go now and can't wait for the season ahead."

Ã¢â¬â¹Ã¢â¬â¹Manager Karl Robinson added: ÃâDiego is top-drawer and heÃâs going to make a big difference to this team

He'll give us tremendous energy in the middle of the park and heÃâs somebody who knows this division having done so well with Charlton two years ago."

Ã¢â¬â¹Ã¢â¬â¹ÃâIÃâm really looking forward to this opportunity of working with him.Ãâ

Ã¢â¬â¹Ã¢â¬â¹West Ham have retained the option of recalling the Uruguay U20 international who also played for England at U-16 and U-17.