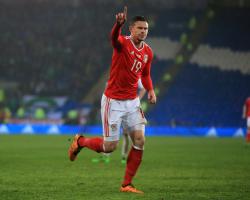 Church capped a satisfying few months on a personal level when he won and converted the last-minute penalty which secured Wales a 1-1 draw with Northern Ireland in Cardiff on Thursday night.

At the start of February, Church took the decision to swap MK Dons for Aberdeen and gamble on regular football in Scotland boosting his ambition to make the Wales squad for this summer's European Championship.

The 27-year-old has responded with four goals in eight games, including a winner against Scottish Premiership leaders Celtic as Aberdeen give chase in what is a closer title race than usual north of the border.

"I had to be selfish at this stage of my career," Church said of his loan deal until the end of the season.

"It wasn't really working out for me at MK Dons and I was grateful for them letting me go.

"It was a difficult decision to leave the Championship, but they're in a relegation fight and it's a great opportunity to be fighting for the title at Aberdeen.

"I've had a bit of a stop-start career and I just felt I needed to play football, especially with it being such a massive summer for everyone.

"It's a different league and a different challenge, but it's been a nice transition and it's gone well."

Church managed only nine league starts in the first half of the season at MK Dons, scoring two goals.

But his new-found confidence was reflected in the way he tempted Northern Ireland defender Gareth McAuley into a rash challenge with time running out at the Cardiff City Stadium.

Church then grabbed the ball to confidently dispatch his third international goal, and his first for two and a half years.

"When I get on the pitch my intention was to try and nick a goal," said Church, who had arrived as a 76th-minute substitute with Wales seemingly heading for a morale-sapping Euro 2016 warm-up defeat.

"I thought it was a definite penalty

I looked around and grabbed the ball as soon as I could.

"It's tough to make an impression in that amount of time, but it was great to get the goal."

And Church believes his cameo role will do him no harm when it comes to manager Chris Coleman selecting his 23-man squad for the finals in France.

Church was very much a bit-part player during the Euro 2016 qualifiers and has not started a Wales game since October 2014.

"Hopefully this helps (Euro 2016 selection), but I've been with the squad and the manager over the years," Church said.

"Playing regular club football is only going to help me and I don't really worry what's going on elsewhere.

"I can only control what's going on with me

Every time I get a chance I try and take it.

"We're all in the same, there's a lot of of competition for places and that shows how talented the squad is.

"You're always pushing yourself, because you know what an exciting time it is for Welsh football."