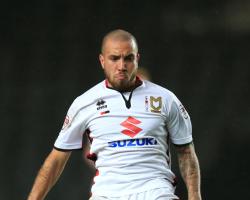 MK Dons midfielder Samir Carruthers is said to have been caught by a photographer as he relieved himself on a balcony while surrounded by racegoers.

The series of images printed in The Sun appear to then show a glass of liquid being poured over the railing by another man as Carruthers, 22, wearing a grey flat cap and waistcoat, grins.

Cheltenham has now moved to block the party from attending day two of the Festival, with the track tweeting: "In regards to images of inappropriate behaviour from yesterday, we have cancelled their booking for today."

Sophia Dale, the Festival's head of communications, added on Sky Sports News HQ: "It was just this small group of people who made this incident happen and they are not welcome today."

MK Dons have launched an investigation into the pictures and said that while Carruthers was involved, neither he nor any other MK Dons player threw it over the balcony.

MK Dons said in a statement: "The club is aware of pictures circulating in the national media of one of its players at the Cheltenham Festival

The club has commenced an internal investigation into the matter."