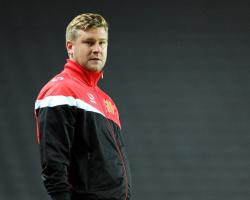 Milton Keynes Dons V Port Vale - view commentary, squad, and statistics of the game live.Baldock worry for DonsGeorge Baldock is the only concern for MK Dons ahead of the visit of Port Vale to stadium:mk.The full-back has a slight thigh strain and is unlikely to be risked, but apart from him, Dons boss Karl Robinson has a fully-fit squad to choose from - which includes the fit-again Lee Hodson and Danny Green.It is only two weeks since the two sides met in an entertaining FA Cup tie at Vale Park, where the Dons edged a seven-goal thriller 4-3, and Robinson is expecting another tough match on Saturday."They're standing in our way again but we're standing in their way as well," said Robinson

They scored three against us so they have a threat - we know how hard it's going to be but we're ready."Ryan McGivern and Richard Duffy come back into the reckoning for Vale following suspension.Both defenders served a one-match ban last weekend as the Valiants recorded a 1-0 home win over Rochdale.Their return gives manager Rob Page food for thought after Freddie Veseli, on his return from two months out with a broken rib, helped Vale keep only their second clean sheet of the season.Newcastle's decision to recall full-back Remie Streete from his loan spell has left Page short of options at the back and now he must decide whether to stick or twist ahead of the trip to Milton Keynes