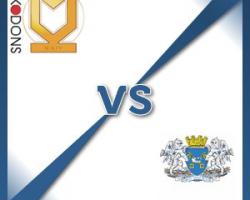 Milton Keynes Dons V Peterborough - view commentary, squad, and statistics of the game live.Dons assessing MartinMK Dons are assessing goalkeeper David Martin as they prepare for the visit of Peterborough.Martin continues to be monitored after missing the last two matches with a thigh strain

If Saturday comes too soon for him then Ian McLoughlin will continue between the posts.Dons boss Karl Robinson is expected to persist with his policy of rotating his attacking players

Ben Reeves could be pushing for a starting place after a couple of substitute appearances following a hamstring injury, while the likes of Danny Green, Devante Cole and Samir Carruthers will also be hoping for recalls.Midfielder Keith Andrews was left out of the squad at Colchester in midweek but may be involved on Saturday, but forward Dean Bowditch (hamstring) is likely to remain out.Peterborough playmaker Marcus Maddison may return to boost the visitors.A knee problem has seen Maddison miss the last two games but Posh boss Darren Ferguson, who is hoping to sign a striker in time for the trip, is 'pretty hopeful' about the forward's fitness ahead of the weekend.Jon Taylor could be close to starting a game after coming off the bench against both Rochdale and Bristol City

The winger has recently returned from a three-month absence with a knee injury.Striker Kyle Vassell is recovering well from his ankle problem and should be in contention for the home game with Bradford on February 28 but midfielder Jermaine Anderson has suffered a toe injury and will not play again this season