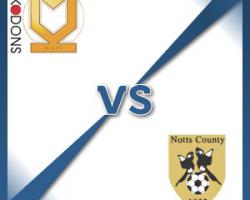 Milton Keynes Dons V Notts County - view commentary, squad, and statistics of the game live.Dons check on BowditchMK Dons will check on Dean Bowditch ahead of the visit of Notts County.Bowditch has had a few groin niggles recently and was withdrawn as a precautionary measure early in the second half of the win at Oldham in midweek

The forward will probably be taken out of the firing line on Saturday, although he could still be included on the bench.Devante Cole is a strong contender to replace Bowditch in the starting XI but Danny Green and Carl Baker are also options for Dons boss Karl Robinson, depending on how he chooses to line up his team.Back-up goalkeeper Ian McLoughlin (dead leg) could return on the bench but midfielder Darren Potter will complete a two-match suspension

On-loan Tottenham teenager Dele Alli is expected back any time now from the ankle injury that has sidelined him for over a month.Jamal Campbell-Ryce will be back in the Notts County squad.The winger, on-loan from Sheffield United, missed the home defeat to Rochdale with a leg injury but he is fit again and will probably go straight back into the team on the right-hand side of midfield, replacing Elliott Whitehouse.Magpies manager Shaun Derry has started with a back three in the last two matches but could revert back to four in defence at stadium:mk

Such a move might see Blair Adams move further up the pitch, allowing Sean Newton to come in at left-back.Midfielder Liam Noble remains unavailable as he serves the final game of a three-match suspension