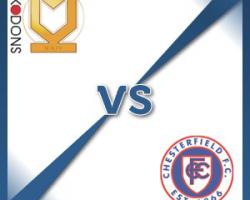 Milton Keynes Dons V Chesterfield - view commentary, squad, and statistics of the game live.Joe ready to go for Dons Joe Walsh could be added to the MK Dons squad for the home game against Chesterfield.Walsh has joined the Milton Keynes club on loan from Crawley until the end of the season with a view to making the move permanent in the summer, when he will be out of contract, and his arrival boosts the defensive options of Dons boss Karl Robinson.Robinson also has the likes of Lewis Baker, Lee Hodson, Danny Green, Will Grigg, Keith Andrews and George Williams to call on should he wish to make any changes to his starting line-up following the defeat at Coventry on Saturday.Goalkeeper David Martin continues to be monitored after missing the last four matches with a thigh strain

Dele Alli (ankle) and Dean Bowditch (hamstring) remain out.Chesterfield will be without Daniel Jones as they look for a third win of the season at stadium:mk.Jones came off injured after just 10 minutes on Saturday but the problem is not as bad as the club initially feared and the left-back should be back in contention when the Spireites host Coventry at the weekend.Dan Gardner is the only other injury absentee for Blues boss Paul Cook and the forward may be sent out on loan to regain his fitness.Elsewhere, Sheffield Wednesday forward Caolan Lavery has had his loan at Chesterfield extended for the remainder of the season and is expected to retain his place in the team while on-loan Birmingham winger Mark Duffy has returned to his parent club.Chesterfield won 1-0 at stadium:mk in December in the FA Cup but the second round tie was ordered to be replayed after the Spireites fielded an ineligible player

Cook's side also won the replay 1-0 in January