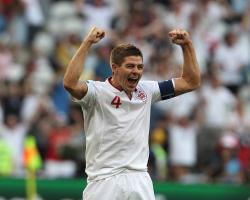 The 36-year-old announced earlier this week that he will not be renewing his contract with the Los Angeles Galaxy when it expires and his departure from the Major League Soccer outfit was expected after they were eliminated from the post-season play-offs.

Former England and Liverpool captain Gerrard said at the time that he was considering the next stage of his career, and it appears that could now be a first venture into management.

Sky Bet League One side MK Dons have been without a boss since Karl Robinson's six-year tenure came to an end last month, with the club now residing in 21st place.

It is understood that the Dons, who have also been linked with Frank Lampard and Ryan Giggs, are not close to appointing Gerrard having only held preliminary talks with the Champions League winner.

Both parties are believed to have been in contact with one another as the Dons prepare to travel to face Bristol Rovers with interim boss Richie Barker still very much at the helm.

Gerrard's exit from the Galaxy was confirmed by the club on Tuesday but the player revealed he had been thinking about his next move for some time already.

''I am now looking forward to spending time with my family as I consider the next stage of my career,'' he said after his 18-month deal ended.

''When I left Liverpool I came to Los Angeles with the goal of helping the Galaxy lift another MLS Cup.

''I am of course disappointed to have not achieved that objective but I can look back at my time at the club with pride at what we accomplished, including two straight play-off appearances and countless memorable moments on the pitch.

''As someone who spent the whole of their career in Liverpool, it has been an incredible experience to come to Los Angeles and play for the LA Galaxy.''

Gerrard scored five goals in 34 appearances but generally his time in California has not been viewed as particularly successful.