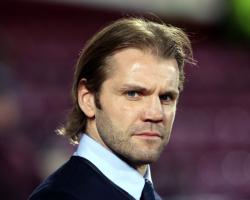 The 36-year-old Scot has been confirmed as the successor to Karl Robinson at the Sky Bet League One club after leaving Hearts, and will officially take charge following Saturday's FA Cup second-round match at Charlton.

He will be joined by assistant Stevie Crawford, who also worked alongside him at Tynecastle.

"The most important thing for me was picking the right chairman and the right club and this was the right match at the right time - it's a club that's going places.

"Hopefully the fans are ready for the ride

We want to create excitement but, most importantly, win football matches

With the squad that we've got here, we should be winning football matches - our job is to help them do that."

The Dons, who parted company with Robinson on October 23, and have since had Richie Barker in caretaker charge, are 19th in the League One table

Their 2-1 victory on Saturday at Coventry was the first time they had taken maximum points in nine attempts.

He guided them to the Championship title in 2014-15 - his first season as a manager - and then a third-placed finish in the top flight last term.

Robbie has been on our list from day one - he's the most exciting young manager in the UK, by a country mile.

"Hearts are a good club

They didn't stand in Robbie's way and they made it possible.

"They worked with us to make sure it was as smooth as it could be, given that it's in the middle of the season.

"We wanted to make sure that we would get the right person for the job and I'm so pleased to be sitting here - almost within the time frame that I gave everyone - with the man I believe is going to take this football club forward."