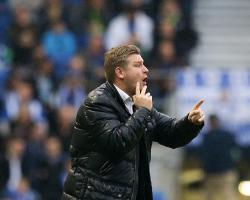 Costa is Chelsea's chief antagonist and attacking weapon, but Robinson will warn his players to focus on themselves and trust referee Jonathan Moss to be on his guard.

The striker drew the ire of Arsene Wenger last Sunday after being involved in the dismissal of Per Mertesacker before scoring the winning goal in Chelsea's Premier League clash with Arsenal.

"You can't get involved in the antics

An awful lot of that goes on," Robinson said on Thursday.

"If he wants to get into confrontation the referee has to do his job and they have to be strong enough to do their job.

"I will tell my players, 'You don't react, you don't get involved in any of the antics

You play your game'.

We know how good he can be."

Chelsea interim boss Guus Hiddink said Costa "likes to fight - in a good way" and is "trouble" for opposition defenders.

It was put to Robinson that Costa was more effective against Arsenal because he concentrated on football, rather than riling the opposition.

As for whether MK Dons might try to provoke him into a reaction, Robinson said: "For me, that's wasted energy

"There's a way of doing it, with a bit of class and conducting yourself in the right manner.

"If he wants to get involved in that, it's not down to me, it's down to him

But you saw at the weekend how good he really is."

Costa withdrew early from the Emirates Stadium fray with a knee injury which makes him doubtful for Sunday's match against the Championship side.

"If he doesn't play they'll be a lot weaker, so it's one we'll be keeping a close eye on," Robinson added.

MK Dons beat Manchester United 4-0 in the Capital One Cup second round in August 2014 before going on to beat Bradford in the next round.

Bradford later that season, in January 2015, shocked Chelsea in the FA Cup fourth round, coming from 2-0 down to win 4-2 at Stamford Bridge against the future Premier League champions.

Robinson will remind his players of those results.

He added: "On the day the players have to perform.

"All the prep and hard work that goes into every game doesn't mean anything if we go and freeze.

"I know they won't

I know we'll try to do our best

The last words I'll say will be, 'Go and enjoy the experience'.

"It's going to be a wonderful experience, playing against some of the best players in the world."

Striker Nicky Maynard is a major doubt with a hamstring injury and will only feature if he is 100 per cent fit as the Dons' battle to avoid relegation from the Championship is the priority.

Defender Kyle McFadzean is available again following suspension and Rob Hall is in contention after being unavailable against his parent club Bolton.

George Baldock has returned following his loan spell at Oxford, but is cup-tied after featuring against Swansea, while Matthew Upson (hamstring), Ben Reeves (thigh) and Carl Baker (ankle) are out.