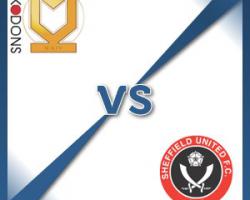 Milton Keynes Dons V Sheff Utd - view commentary, squad, and statistics of the game live.Same again for DonsMK Dons should have an unchanged squad for the visit of Sheffield United.The Dons were dealt a blow this week when top scorer Benik Afobe, on loan from Arsenal, completed a permanent move to Wolves

The 19-goal striker was in talks with the Championship club last weekend, hence his absence from the squad at Crawley.Manager Karl Robinson made six changes for that trip, following the FA Cup exit to Chesterfield.He is likely to tinker with his team again against the Blades, with the likes of Danny Green, Dean Bowditch, Daniel Powell and George Baldock options for the Liverpudlian.United manager Nigel Clough is unlikely to make any unforced changes to his starting line-up as his side chases a third straight win.Clough has no major new injury concerns, but central defender Chris Basham will miss out again as he serves the final game of a three-match ban.Fellow defender Craig Alcock overcame a back injury in time to step off the bench in last week's home win against Preston and is pushing for a recall, while striker Marc McNulty is expected to resume up front after scoring in the last two games.Forward Michael Higdon and teenage midfielder Louis Reed both hope to return to action as they were unused substitutes last week