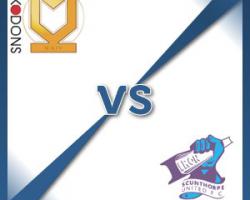 Milton Keynes Dons V Scunthorpe - view commentary, squad, and statistics of the game live.Same again for MK DonsMK Dons are expected to have an unchanged squad against Scunthorpe as they look to keep themselves in the hunt for automatic promotion.After a superb performance in defeating Swindon on Saturday, Milton Keynes manager Karl Robinson may be tempted to name the same team that started at the County Ground, which would be a rarity this season.One or two changes are likely though and the likes of Devante Cole, Lewis Baker and Danny Green are contenders for recalls.Midfielder Carl Baker and winger Ben Reeves, who will not play again this season because of a calf problem, remain out injured.Scunthorpe defender Niall Canavan is an injury doubt after being forced out of Friday's home win against Peterborough early in the second half.Canavan sustained a knock in the 59th minute and was replaced by Andrew Boyce, who is expected to return to the starting line-up.David Syers could play a bigger role after stepping off the bench for the last five minutes against Peterborough

It was the midfielder's first appearance since sustaining a serious knee injury on the opening day of the season.On-loan Everton midfielder John Lundstram and striker Kevin van Veen are hoping to retain their places in the starting XI, but George Evans and Liam O'Neil are pushing for recalls