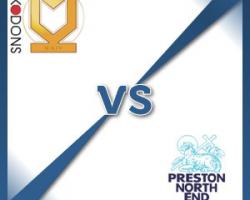 Milton Keynes Dons V Preston - view commentary, squad, and statistics of the game live.Lewington banned for DonsSuspended MK Dons captain Dean Lewington must watch from the stands as his side look to bounce back from successive defeats against in-form Preston.The club's longest-serving player was sent off during the home loss to Chesterfield in midweek and will serve a one-match ban on Saturday

Joe Walsh, signed this week from Crawley, could make his debut while Lee Hodson is also an option to replace Lewington at left-back.Dons boss Karl Robinson will be forced into another change as George Williams came off injured against the Spireites

Depending on how Robinson opts to line up, Danny Green, Carl Baker, Keith Andrews, Samir Carruthers and Devante Cole all come into contention for recalls.Goalkeeper David Martin, who has missed the last five games with a thigh strain, will undergo a fitness test on Friday but Dele Alli (ankle) and Dean Bowditch (hamstring) remain out.Jermaine Beckford will be pushing for a start in Preston's attack.The ex-Leeds and Everton striker has scored in back-to-back fixtures as a substitute since making his comeback from an ear infection and boss Simon Grayson may be tempted to pair him with top scorer Joe Garner.Grayson has a fully-fit squad at his disposal and the return of captain Tom Clarke from a head injury was the only change he made in the midweek draw with Doncaster.The likes of Neil Kilkenny, Scott Wiseman and Kyel Reid will hope to come into a Lilywhites team which is undefeated in six straight Sky Bet League One games