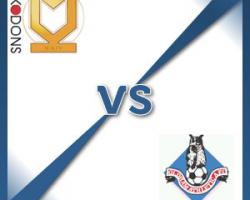 Milton Keynes Dons V Oldham - view commentary, squad, and statistics of the game live.Reeves still out for DonsBen Reeves is expected to be the only absentee for MK Dons when they host Oldham at stadium:mk.The midfielder has still not recovered from the hamstring injury he suffered during the win at Sheffield United at the beginning of the month.Otherwise, Dons boss Karl Robinson has a full squad to choose from against Latics

Defenders Antony Kay and Dean Lewington emerged unscathed from the draw at Preston last Saturday, after picking up knocks in training the week before.With Robinson yet to pick the same team in consecutive games this season, changes could be on the cards and Danny Green, Lee Hodson, George Baldock, Will Grigg, Dean Bowditch and Samir Carruthers will be hoping for recalls.Oldham will have top scorer Jonathan Forte back as they bid to bounce back following the thrashing by Yeovil.The striker, who has netted 13 times this season, missed the 4-0 defeat because of flu but returned to training this week.There is also an outside possibility that midfielder Liam Kelly returns from a hamstring strain, although boss Lee Johnson concedes the fixture may arrive too soon.Genseric Kusunga and Timothee Dieng were hauled off at half-time against the Glovers and may lose their starting spots, while fellow defender Adam Lockwood (knee) is expected to return later this month