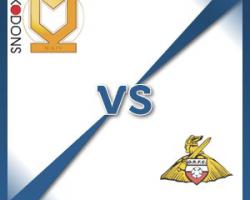 Milton Keynes Dons V Doncaster - view commentary, squad, and statistics of the game live.Carruthers back for DonsSamir Carruthers comes back into the reckoning for MK Dons as they look to maintain their automatic promotion challenge against Doncaster.Carruthers has served a two-match suspension after receiving his 10th yellow card of the season in the goalless draw at Port Vale and his return gives Milton Keynes manager Karl Robinson further options in midfield.Danny Green, Daniel Powell, Devante Cole and the fit-again Carl Baker will also be vying for recalls to the starting line up.Midfielder Ben Reeves (calf) remains out for the Dons, who are now only one point behind second-placed Preston after winning six of the last seven league games.Paul Keegan is likely to be the only absentee for Doncaster.Keegan suffered a knee injury at the beginning of March and, despite his recovery coming along well, the midfielder may not be risked again this season as Rovers can not win promotion."There's no point in rushing him

He's running and we want him to take his time recovering," said Doncaster boss Paul Dickov.Defender Luke McCullough is fit again after his recent knee trouble and midfielder Abdul Razak has recovered from a bout of illness