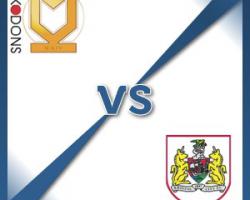 Milton Keynes Dons V Bristol City - view commentary, squad, and statistics of the game live.Grigg back for DonsWill Grigg is expected to return to the MK Dons squad for the top-of-the-table clash with Bristol City at stadium:mk.The striker missed the 5-0 win at Crewe last weekend through injury

Milton Keynes manager Karl Robinson, who will serve the final game of his four-match touchline ban, has frequently rotated his attacking players this season so Grigg could find himself straight back in the starting line-up.Winger Ben Reeves is also ready to come back into the reckoning after his recent absence with a hamstring problem.Midfielder Keith Andrews, a Dons player between 2006 and 2008, will hope to make his second debut for the club after returning on loan this week.Bristol City look likely to be without Aaron Wilbraham when they travel to face his former employees.The 35-year-old is closing in on a return after six weeks on the sidelines with a hip ligament injury but this match looks to have come too soon for the striker.And fellow striker Kieran Agard made his return to the starting line-up against Fleetwood on Sunday after recovering from an ankle injury and he will hope to keep his place against Karl Robinson's Dons.Luke Freeman and Jay Emmanuel-Thomas started that victory over the Cod Army on the bench and the pair look likely to be recalled