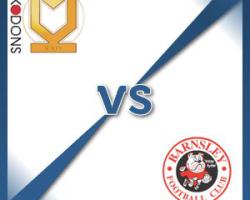 Milton Keynes Dons V Barnsley - view commentary, squad, and statistics of the game live.Cole set for Dons debutDevante Cole could make his MK Dons debut against his former team Barnsley.Cole joined the Milton Keynes club on Thursday on loan from Manchester City and could start on Saturday

He is unlikely to take Will Grigg's role up front but the 19-year-old could feature on the left wing for Karl Robinson's men.Cole scored seven goals in 17 starts for the Tykes during a loan spell at Oakwell earlier this season.The Dons have no fresh injury worries and the likes of Dean Bowditch, Daniel Powell, Samir Carruthers and Jonson Clarke-Harris, another recent loan arrival, will also be looking to start in the attacking positions.Barnsley will be short of central defenders again if both Peter Ramage and Martin Cranie fail late fitness tests.Ramage missed last week's defeat at Doncaster due to a thigh problem and Cranie has been sidelined for four games with a knee injury.The Reds will be without teenage centre-half Mason Holgate, employed at right-back in recent weeks, as he serves the first game of a three-match ban following his straight red card at Doncaster.Midfielder Ben Pearson, on-loan from Manchester United, is hoping to return for his second appearance for the club after missing out last week with an ankle injury