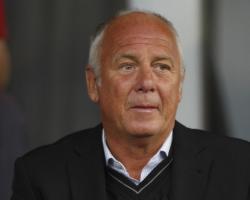 A statement on the Dons' official club website, mkdons.com, said: " Milton Keynes Dons Football Club are devastated to learn that chief scout Andy King has suddenly passed away at the age of 58

"King, who joined the Dons' backroom staff in 2014, was a hugely respected figure throughout football and a magnificent individual and friend to many at MK Dons - he will be missed greatly.

"The thoughts of everyone at MK Dons are with Andy's wife Barbara, his family and his friends at this extremely sad and difficult time."

King represented many clubs during his playing career but it is for his two spells with Everton that he is perhaps best remembered, and in particular for his winning goal against Liverpool.

King scored 49 goals in six years between 1976 and 1984 for the Toffees, but none more memorable than the iconic strike that settled the 1978 Merseyside derby that etched his name into Everton folklore

He returned to scouting with MK Dons two months later