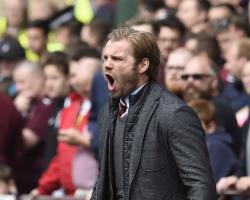 However, the Hearts head coach refused to confirm he would be moving to the English League One side, saying: "What will be will be."

A double from forward Robbie Muirhead - his first two goals for Hearts since signing in the summer - lifted the Edinburgh side above the visitors and into second place in the Ladbrokes Premiership.

Asked if it was just a case of Hearts and MK Dons agreeing a fee to allow for his release, former Hearts defender Neilson said: "There are discussions at the moment but I don't want it to be about me

"It is about Robbie Muirhead, a boy who was at Kilmarnock, Dundee United, drifting about, Partick Thistle, boys like that who come here to a good environment and encouragement from the fans and scores two goals.

"I will be back in tomorrow morning and what will be will be.

"It is not about me, it is about the players and the club getting second in the league, following recent relegation and the long journey, it is phenomenal for the whole club.

"It is not about my situation

That will be dealt with tomorrow."

Gers boss Mark Warburton is looking for his side to bounce back against Aberdeen at Ibrox on Saturday.

He said: "Any points you drop are valuable, the good thing is we get the chance to put it right on Saturday.

"We have to have a good response

There is no feeling sorry for yourself.

"We weren't good enough tonight and that is us as a group.

"Everything is together and tonight we have to recognise that, it is important sometimes.

"Honesty is the best policy, you can mask over it and say we should have had the offside goal and we had one cleared off the line - no.

"Tonight as a group of players we didn't think we were good enough and what we have to do is respond very positively and look forward to the game against Aberdeen."

The offside goal Warburton was referring to was when Joe Dodoo had the ball in the net just after the break with a drive only for referee Craig Thomson to eventually rule it out for Harry Forrester standing offside.

The former Brentford boss was unhappy at the time it took to make the decision.

He said: "We weren't happy, I think Harry was probably offside but the fact is the goal is given, the linesman is the last man, his flag doesn't go up for 14 seconds.

"He walks five or six paces down the line - what happened to change their mind? We were bemused by that decision.

"It is not clutching at straws or being a sore loser, it's just that it makes it 1-1 and it is an important turning point.

"We asked the fourth official why and I got told they were deliberating the decision.

"In my mind, as the (match) delegate just confirmed, it is either instantaneous that he is offside or he is not."

Rangers forward Kenny Miller admitted Hearts did not give them a chance to get into their stride and play their usual passing game.

He said: "It was the first time since the manager came in that I felt we had to resort to going long straight away.

"The manager talks about finding solutions but we never found a way to play from the back.

"We couldn't get into the flow of the game and it became a battle.

"I accept that when you go to Tynecastle but we usually can take that out of the equation.

"But tonight we couldn't manage that

In terms of being up for a battle we weren't really at the races.

We keep talking about trying to get three wins in a row and so it's back to the drawing board.

"But it's a great game, Aberdeen at home, a chance to get back right on it against one of your main rivals for second spot.

"It's a huge chance to get back on the horse but we'll have to play a lot better than we did tonight."