MK Dons down as Championship promotion race goes to the wire 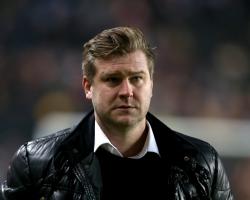 Brighton, who travel to Middlesbrough on the final weekend of the season, held up their part of the bargain by beating already-relegated Charlton 3-1 thanks to goals from Sam Baldock, Jiri Skalak and Tomer Hemed - an injury-time penalty - with Johann Berg Gudmundsson scoring for the Addicks.

Middlesbrough, meanwhile, were held to a goalless draw by Ipswich.

Peter Whittingham scored a stoppage-time penalty as Cardiff moved to within four points of sixth-placed Wednesday, who they play next, with a 2-1 win over 10-man Bolton

Zach Clough gave the League One-bound Trotters an early lead but Kenneth Zohore equalised after Niall Maher's red card and the Bluebirds nicked it at the death.

The visitors took the lead through Chris Wood, who later had a penalty saved, but needed a Stuart Dallas equaliser to rescue a point after Abel Hernandez and Tom Huddlestone both scored in first-half injury time.

MK Dons' relegation to the third tier was confirmed by a 4-1 home defeat to Brentford, who hit back after Nicky Maynard's early opener with goals from Sergi Canos, Lasse Vibe, Ryan Woods and Jake Bidwell.

Rotherham secured another season in the Championship with a goalless draw at Wolves, while Fulham are also safe despite a 3-1 loss to Nottingham Forest, with Henri Lansbury scoring twice - the first from the penalty spot - after Robert Tesche's opener

Substitute Matt Smith had pulled one back for the Cottagers just after the hour mark.

Danny Graham netted a brace for Rovers either side of goals from Jonathan Kodjia and Aaron Wilbraham for the Robins, who had Korey Smith sent off late on.

Deniss Rakels' goal earned Reading a 1-1 draw at QPR, who had opened the scoring through Grant Hall, and it was the same scoreline at Huddersfield after Joel Lynch responded to David Cotterill's opener for Birmingham.